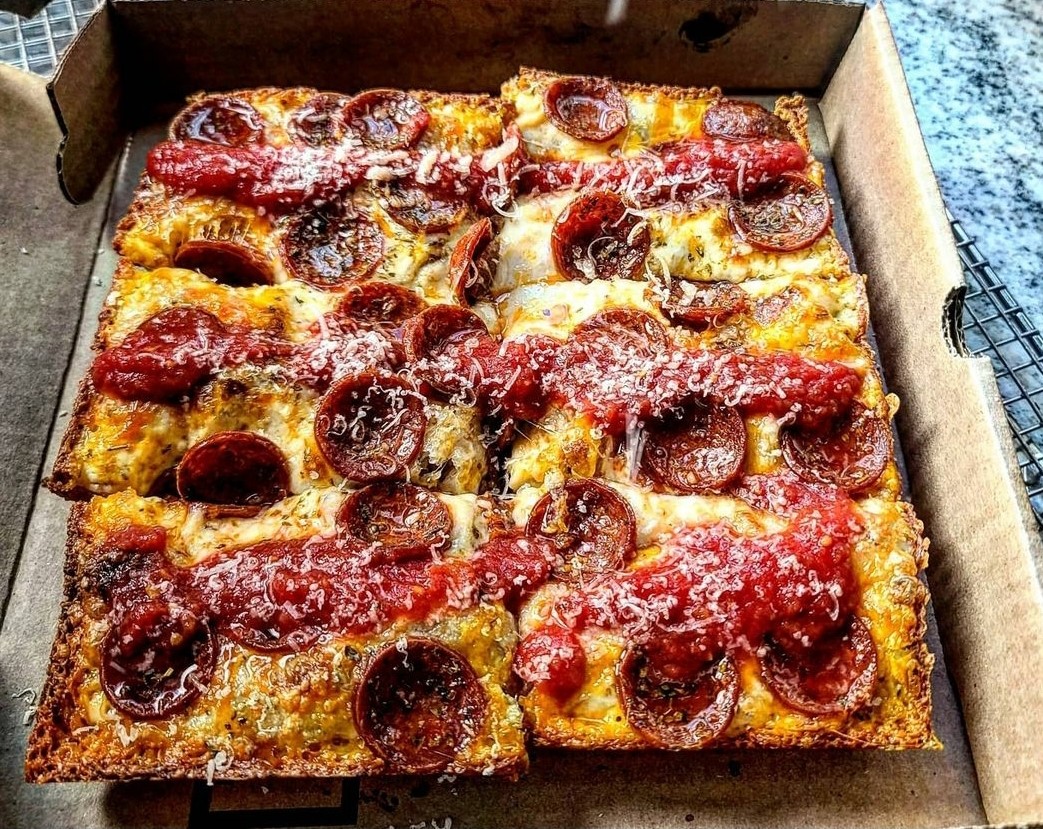 Often called “The Motor City’s Most Popular Export Since the Model T,” “people cannot get enough Detroit-style pizza” says our Resident Instructor/Pizzaiolo Felice Colucci.  Originally introduced at Buddy’s Rendezvous in 1946 in Detroit, this now classic pizza-making style was not available outside of the city until 2010.  When Detroit -style pizzerias started opening up in other places in the country, interest spread quickly.  In 2012, it was a Detroit-Style pizza that won the Las Vegas International Pizza Expo world championship, and that is when the trend really took off.

Chef Felice says “This style is distinguished the way it’s borders are topped. When preparing the Detroit-style pizza, Brick Cheese from Wisconsin is sprinkled along the sides of the pan between the pan and the crust to make a very crunchy, slightly charred crust. The pizza dough is first topped with mozzarella and then baked while the tomato sauce is slow-cooked separately and then used to top the pizza after the cheese has already been melted.”

We are proud that one of our students, David Lee, has made a name for himself and his business with Detroit-Style pizza. When David first began experimenting with pizza styles at home, Detroit quickly took the lead because it was his wife’s favorite. Nowadays, his made to order pizza sells out a week in advance, and within minutes of appearing on Pizza Jawn’s website!

When discussing how he became interested in Detroit-style, Lee says,

“I was a pizza lover and started like a lot of people do. I bought dough at the grocery store and pizzerias then brought it home and worked with it. I used The Pizza Bible as my guide and made pizza for friends.”  At that time, Pizza Gutt was doing Detroit Style pop-ups, and Lee enjoyed them so much, that he got a portable pizza oven and came to the Pizza University to study pizza making.

Lee enrolled in classes with several of our Maestri such as Giulio Adriani,  Peppe Miele, and Tony Gemignani.  His time here was his “first time being around pizzaioli “ and Lee “learned what he needed to learn to became serious about pizza”  and this eventually led him into doing Detroit-style again.

There was a practical reason for choosing Detroit-style pizzas for his business, too.

Lee says he can fit more into his oven and he sells mostly Detroit-style pizzas.

Pizza Jawn started out as a mobile company which hosted private events and brewery gigs.  During the pandemic, he started hosting social distancing pick-ups in the neighborhood for two days a week.

The first week in August, 2020, he opened a physical location which offers online ordering only  as a means to ensure quality service and social distancing.  Each Thursday night, he places new order options on the website and Instagram at 8pm so that customers can order for the next week.  Pizza Jawn’s typically sells out within 10 minutes. His customers can then safely pick up their pizzas at their allotted times from Tuesday through Saturday.

“There is a misconception that they (our pizzas) don’t really sell out that quickly, says Lee, but they do – it depends on oven capacity- that’s  why they take orders at time slots per capacity.” Pizza Jawn’s originally had lines all the way down the street – and it became difficult to maintain social distancing and feed everyone.” Their new platform works with the capacity of the oven and allows efficient service as well as appropriate safety measures.

If you are planning on being in the Philadelphia area, try a Pizza Jawn Detroit-style pizza for yourself. If you are interested in becoming a certified pizzaiolo, check out our private classes here.

Pizza & The Pandemic: How Covid 19 Caused a Boom in Our Industry

These Pizza Crust Trends are on Top for 2022

Americans love pizza—over 83% of consumers report eating it at least once a month*. But preferred tastes come and go, and there are a variety of new toppings, crusts and …

Star-shaped pizza from our friend Award-winning Neapolitan Pizzaiolo Antonio Fusco   Adding festive, holiday flair to pizzas is an easy and fun way to incorporate the spirit of the season …

A Conversation with Our Culinary Director

October is National Gourmet Adventures Month, and we’d like to introduce you to our new Culinary Director, Chef Sedrick Crawley. Chef Sed’s gourmet adventures have taken him from the world …