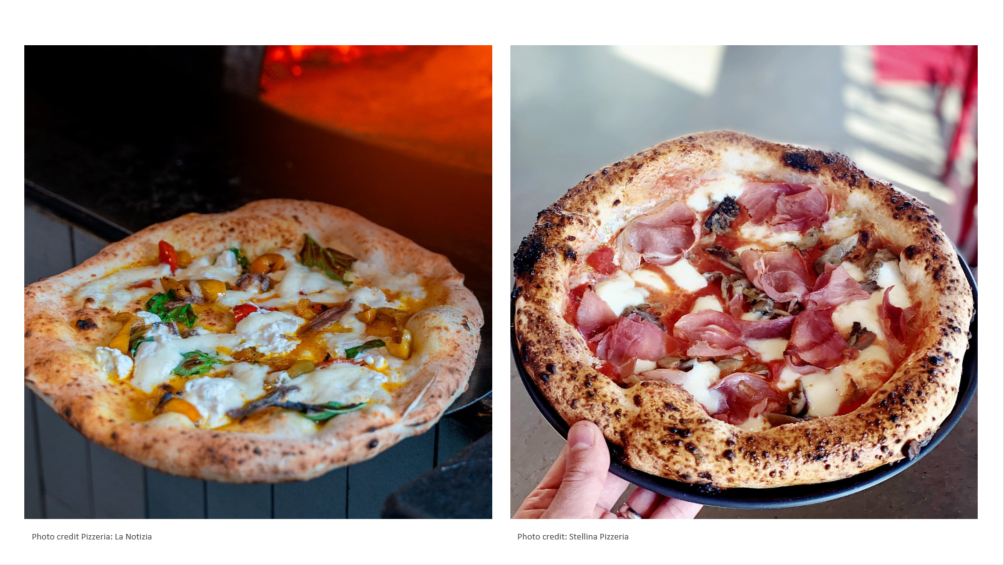 Last year we created a popular post which highlighted and classified different types of pizza styles on the market today. Called Detroit, Chicago, NY or Napoli? All You Need to Know About Pizza Styles,

the blogpost helped  to clear up the confusion in the industry today.  While we love all styles of genuine, hand crafted pizza, we get a lot of questions about the differences in styles. Many people have trouble distinguishing traditional and authentic Neapolitan pizza from the increasingly popular Neo-Neapolitan in the US. This month we’re weighing in with the experts to find out what they have to say about the styles they have built their businesses and lives around.

“Pizza is the quintessence of Neapolitan culinary art,

The most celebrated and imitated dish of Italian gastronomy

And so it must  become a true work of art in the wise hands of the craftsman.”

This is the most widely reproduced or copied of all pizza types. Authentic Neapolitan Pizza, or Pizza Napoletana, is known for being very tender, light, and moist at the same time. It cooks in a wood-burning oven at 800F degrees oven for only 90 seconds and needs 58-65% hydration. Its’ ingredients must be Italian and coming from a specific area such as San Marzano tomatoes. You cannot use more than 3 ingredients at a time in this type of pizza.  Neapolitan pizza is all about the marriage of ingredients with the proper technique. Pizza Napoletana is always finished with extra-virgin olive oil and fresh basil. For more information on the official guidelines of Vera Pizza Napoletana, click here.

Former Pizza University Alumnus Chef/Pizzaiolo Matteo Venini who co-owns award-winning Stellina Pizzeria with Antonio Matarazzo prefers the crunchiness of Neo-Neapolitan pizza as well. The versions he serves at Stellina are appreciated for both “their flavor and lightness, “ he says. Chef Matteo uses a biga and a minimum three-day fermentation process to add flavor. He also uses less yeast than normal so that he can ferment the dough for that long without over proofing it. This, he says, “makes the pizza easier to digest.”

Out of the Neapolitan style, the Neo-Neapolitan style was born. Also referred to in the industry as NEOpolitan, American Artisan and neo Classica, this style of pizza uses the same dough as the Neapolitan and similar ingredients, although the rules aren’t as strict, so some chefs take creative license to switch things up a bit. These pizzas usually cooked in an oven which is heated between 700F-730F degrees in 2 to 21/2 minutes. Neo-Neapolitan doesn’t need to be cooked in a wood-burning oven, so serving it gives restaurant owners greater flexibility in their oven choices. The lower temperature and additional cooking time produce a more crunchy exterior which is very popular in the United States. It is said that Americans want their pizza to look like Pizza Napoletana and for it to use the same high quality ingredients, but they also want it to be crunchy – which violates the traditional Neapolitan standards. As the Neo-Neapolitan trend continues to grow in the United States, some pizzaioli are even fortifying their dough with stronger types of flour to provide extra crunch. Marra Forni has even seen a dramatic increase in sales of gas-fired ovens which can produce the  temperatures needed for Neo-Neapolitan pizza.  User -friendly gas-fired ovens are the perfect solution for this American interpretation of the Neapolitan original.

Our Resident Instructor, Pizzaiolo Felice Colucci says “Neo- Neapolitan is more American – it’s ike Neapolitan but it is cooked at 700 degrees which gives it a crispier texture, while maintaining the look of a Neapolitan pizza.”

As you can see, Neo-Neapolitan’s characteristic crunchy texture is what differentiates it from Neapolitan. Regardless of which version your palate prefers, preparing each of the styles offer both pizzerias and the people who frequent them various incentives. To prepare and eat an authentic Neapolitan pizza is to participate in a centuries old ritual which has been listed on  UNESCO’s Representative List of the Intangible Cultural Heritage of Humanity. Neo-Neapolitan, on the other hand, gives a nod to tradition while adapting to more flexible guidelines in order to be more widely prepared and consumed outside of Italy.

Both our students and staff get excited when Grande cheese participates in our professional certification courses. It’s not every day, after all, that you can learn the techniques of …

You Say Tomato, We Say CIAO!

Not all canned tomatoes are created equal! February is National Canned Food Month, and we consistently partner with CIAO brand Italian tomatoes imported by Orlando Foods for their taste, health …

Water and flour are two ingredients which are capable of opening entire worlds of culinary creativity. January is National Baking Month, and it’s the perfect time for us to share …